Success of a runner

Home/Biomechanics, by Lorna, Runners, Uncategorized/Success of a runner
Previous Next

Success of a runner 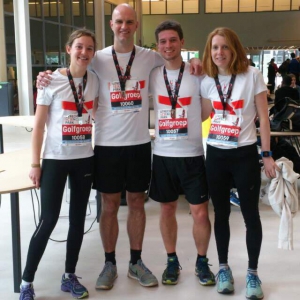 Today I would like to share with you the story of a runner I have been working with.

Joost came to me because he had heard about what I do and wondered if I could help him with the problems he had been experiencing while running. I explained to him that I don’t treat pain and that I can only work with him to correct how his body moves. Happy with this we got started.

Firstly we discussed his goals: to complete the Amsterdam half marathon (later this year) and run another couple of half marathons in Texel and Vlieland. He does trail running and also some climbing.

This is what he told me about his running:

It was 10 years ago that I had problems with the shins (I guess MTSS is the proper name now), at that time I was running four times a week. I tried to recover for over a year with many sessions of physiotherapy, a period of weekly massages of the calves and eventually also special soles in my shoes, nothing helped and I lost all motivation to continue running. Now more or less a year ago I started running again and worked towards the Egmond half marathon, but I had problems with the painful shoulder and tight calves. As I wanted to know what could be the origin of the painful shoulder and I was afraid the shin problems would come back because of the tightness of the calves, I came to see you. And yes, there also was occasional knee pain.

He is a researcher and sits a lot in front of a computer.

In the first session I screened him and found areas where we could improve upon: pelvis, spine, shoulders, knees and feet. I sent him off with exercises to release muscle spasm in his pelvis and back.

When he came back the following week he mentioned that he had felt his shoulder less. Also, he had felt more flexible while climbing.

Over the next few weeks we met either every week or every second week. Every time he was sent off with homework and he was very good at following my instructions.

These were his comments over the weeks:

He had run on the beach and experienced “less tightness” in his calves than he expected.

Joost went away for a couple of months for his work and had the opportunity to stand at a standing desk and he had continued with the exercises. He started to figure out which were the exercises that helped keep him maintained. At one point he told me:

When we first met, I thought it would be too boring to a run a marathon, but as I’m enjoying running more, now I’m considering one. With less pain and worries, running definitely gets more fun and I think our sessions therefore helped to make it more fun to run further and further :)

A few days after that I got a message that he had signed up for a 37km trail run. And the day after I got another message saying that he had run a 20km training run without feeling his shoulder pain at all.

As well as following the instructions I have given him, he has also looked at how he moves day to day, making sure that he moves around during the day and stands up when he can. He has bought a platform for his computer at work, to combine sitting and standing.

Since originally writing this, Joost did the Texel half marathon in August in 1 hour and 36 minutes with no problems at all. Well, except for the usual muscle pains you get after a big effort.

If you are an athlete interested in a moving better in order to achieve better results get in touch to organise a Biomechanics Coaching screening.