Home/Uncategorized/Starting triathlon – my experience
Previous Next 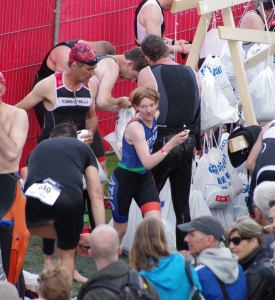 As I sit on the eve of my first triathlon of 2019 I am reflecting on the start of taking up this crazy sport. In my last blog post Why I started running I said that I had intended to take up triathlon many years previously, but fell in love with running and 10 years later I finally did my first triathlon. I also mentioned the draw to triathlon came after taking part in a triathlon relay with my work.

It was a long time coming and one big reason was that I hadn’t taken up sooner was that I didn’t really like cycling. I had come to a point where I was occasionally on the podium for my age group at local running races and all those years of running didn’t really convert to a strong cyclist. That was hard to get, to be fit but not the right kind of fit. I didn’t love going out on a bike and I had to invest so much time into it. Anyway, I eventually got myself signed up for a sprint triathlon at Amsterdam Nieuw West. Once that was done I had to figure out the rest. The bike I owned wasn’t the best for me, so I sold it on and bought a new one. This was just weeks before the event! I got out for some cycles and was advised just to cycle as much as possible. I thought it best to take the advice of the strong cyclists I knew, but there was a niggle in the back of my mind that I should be doing interval trainings like I did in running. But what did I know???  I now wish I had done interval training as well as some longer rides.

Cue first race at Nieuwe west. It was a sprint – 750m swim, 20km bike and 5km run. I arrived to register at the start. There was a team of ladies all in matching trisuits and tracksuits, and they had sponsorship! I was soooo intimidated. What was I doing here? Only people who know what they are doing should be here. The funny thing is that over the last years I got to know some of these lovely ladies who were in matching trisuits and turns out they are not so intimidating at all and actually we are a lovely group of women.

First time walking into transition is pretty petrifying. You have to set up everything you need next to your bike and you have to remember where your bike is for when you come out of the water. Only the participants are allowed into the area so I didn’t have the comfort of my boyfriend there to help.

My memory of the triathlon was that my feet were numb from the cold water until I was 1km into the run! Sighting was pretty hard for me back then, I had to stop and tread water for a few seconds every so often to see I was going the right way. The transition is challenging, you have to take your wetsuit off, put cycling shoes on and make sure your helmet is on before you touch your bike.  Then you can’t get on your bike until you are out of the transition zone. During the cycle I was just passed constantly and didn’t pass anyone at all. It was also the first time I had ever gone straight from bike to run and that was a shock. Instant pain in my shins – wow! What is going on? But the slow cycle meant I could pass people again on the strong part of the run, that is a motivator.

The result was amazing. I was 8th in my age group out of 36 (women up to 39).  I was 4th fastest swimmer, 22nd in the cycle and had the fastest run. That got me hooked. Interestingly the time I had that day (6 years ago) definitely wouldn’t get you so far up the rankings as happily there are more women in the sport and it is definitely become more competitive. In saying that it would be great to see even more women in the sport.

And I still didn’t like cycling. That took a few more years as well as the conversion in my mind from being a runner who does triathlons to being a triathlete.